Can you help with these actions this week.... 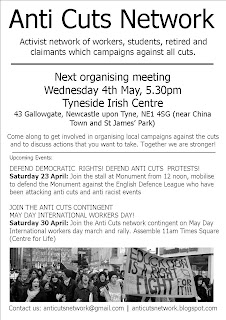 Events and actions coming up this weekend, volunteers wanted.

2. All weekend Save Chirton House campaigners will be leafleting to Defend Adult Care Services and build for public meeting
Info from Paul:
Propose following 4 areas:
1. Gosforth/salters Lane/kenton rd/Gosforth High Street ; 2. South Gosforth to Ilford Rd.Mathew Bank and into West Jesmond
3. Jesmond Vale/Brandling Village/Osborne Road streets.;  4. High Heaton/Wellburn Park/Heaton Rd-Cartington Tce/Sandyford Lane
Meeting places can either Pauls  flat in Heaton / Byker (just by Morrisons) call 2650906, or Regents Centre Metro
Paul mob 07599 717 707  or appleinyoureye@googlemail.com
Can anyone able to give up an hour leafleting streets or who can just take a bundle of leaflets from Paul contact him as above

3. Meeting to make placards and banners (and planning anti cuts conference in June - meet at 5.30pm at Star and Shadow)

5. Put 25 June in your diary and help plan for Anti Cuts conference

http://anticutsnetwork.blogspot.com/
Posted by Anti Cuts Network at 14:08 No comments:

Email ThisBlogThis!Share to TwitterShare to FacebookShare to Pinterest
Labels: actions

1. Newcastle College reports
After the strike action against job cuts last week, people reported on the success of the strike supported by ACN
Lecturers were banned from holding union meetings on campus and a meeting of UCU members voted unanimously for no confidence in the College Director Dame Fisher and of full confidence in their branch sec Dave O'toole.
Stacy reported on the student Save Our Staff campaign and proposals to continue to build support from students, and a meeting with Student Union and the college.
It was proposed that we encourage ACN and other anti cuts group to show support for Striking Lecturers and UCU by using photo of people holding placards (Like the campaign to support vicitmised students at Sussex) will  liase with SOS and NFEN on this.
It was agreed that we will raise with UCU including ESOL campaign alongside opposition to job cuts, as we a aware that staff and students and community will be affected by both attacks.

2. May Day
Agreed to build the may day Anti Cuts secton:
- to have a leaflet supporting those taking action and including support for all those taking action including, strikes, walkout, demos and campaigns, also promoting the conference (Date and details to follow)
- to organise placard / banner making (meet outside Star and Shadow Wed 27 April 5.30pm, Ed to check venue)
- agreed to ask for speaker at May Day
- agreed to put out call for chants on the march and have megaphone (perhaps not right behind the brass band)
- agreed to have chants specifically aimed at Vodaphone, HSBC and Barclays and to make a big noise approaching these shops on the route.

3. Stall at Monument on Saturday agreed we would have two stalls one next to the Unite on St Georges day - anti racist music event, but also on other side of monument so people can talk about the cuts and not disrupt the music. Agreed on stall to have a ACN sign up sheet, HSBC three petion, ESOL and college petions and leaflet about may day and future meeitngs.

4. HSBC campaign. Tom showed the produced statement for raising funds for appeal and this was agreed
IT was agreed to aim for a benefit in June, possibly the date of conferecne

5. Conference to oppose the cuts
It was agreed to plan more for this 25 June conference at teh banner making on Wed 27 (meet at 5.30 outside Star and Shadow)

7. Stuart reported on ASOS week of action and will send stuff to list to be circulated

8. Ed reported that more on Chirton House campaign and leafleting about Saving Adult Care in NEwcastle and will circulate info,
Posted by Anti Cuts Network at 14:02 No comments: