Thanks to everyone who came along to the Anti Cuts Gathering; it was a good day of discussion, planning, and proposing events and action.

Thanks to everyone who helped organise, publicise and prepared great food. Thanks to Star and Shadow for the venue and volunteers.

See you there!
Posted by Anti Cuts Network at 09:38 No comments:

Hi all.Agenda is here for 25 June. We have volunteers for food and a couple of others for the day.But we would like a few volunteers for desk and also volunteers to help sessions run to time (and scribe action points from workshops on flip chart)Finally if you want a stall its £5... let us knowAgenda and details for Gathering - Sat 25 June - Star & Shadow Cinema10 am             Registration10.30 - 11.30    Workshops A (see list below)11.30 - 12.30     Workshops B (see list below)12.30 - 1.15        Lunch (cooked and made by our able volunteers and thanks to Unite the Union for financial support) 1.15 - 2.45        Forum: Fighting the Cuts - what role for Unions and Strikes (local activists, trade unionists and 30th June strikers) 2.45 - 3    .00        Break 3.00 - 4.00        Where next for Anti Cuts movement (discussion on principles, strategy and concrete action) 4.00 - 5.00        Workshop C (see list below)Workshops A:1. Police Harrasment and Defence Campaigns / Right to Resist (HSBC 3 Defence Campaign & Right to Resist)2. Newcastle College campaign to save jobs and education (Vanessa Maughan UCU and Stacy SOS)3. Community Campaigning - Vicki Gilbert and Paul Baker (Left Unity, Keep Metro Public and other campaigns)4. Consensus decision making / listenings skills (to be confirmed!)Workshops B:1. Education Forum: Including Bob and Daniel (NCAFC) and local NFEN, SOS, and student protestors)2. Benefits and Disability campaigning (Helen - Claimants Union, Stuart Bracking and Alisdair Cameron)3. Keep Our NHS public (Dr Helen Groom - tbc / Pete Campbell from KONHSP)4. How to organise a strike (North East Shops Stewards Network to be confirmed)Workshops A and B can come up with ideas or suggestions for the 3pm - 'Where next' session, but we don't what that session to be taken up with just report backs, but proposals or points that we all need to discussWorkshop C:1. Self Defence - Trev Bark2. Use of social media (Pete / Gabe / NFEN)3. Banner making / Placard making for 30th June strike day
Posted by Anti Cuts Network at 11:30 No comments:

Saturday 9th July, 12pm, Grey’s Monument, Newcastle
Last Saturday’s demonstration against political policing had to be called off after about 40 minutes due to torrential rain. It was a great shame as the turnout was good and lots of people were eager to speak out against what police have been doing at demonstrations, and what they represent. A crowd had gathered watching the speeches, and many members of the public were really supportive. A predictably large amount of police were present, as well as two English Defence League (EDL) members who attempted to challenge the demonstration with some repeated shouting of ‘get a job’ and ‘ get a wash’. Yet more confirmation of the anti-working class politics which lead the EDL to support the cuts, and the wars in the middle-east.
Join us on 9th July....
A demonstration to defend democratic rights and stand in solidarity with all those being targeted and criminalised by the police.
Called by HSBC 3 Defence Campaign. Supported by Anti-Cuts Network, Fight Racism! Fight Imperialism! Glasgow Defence Campaign, Subversion, Tyneside Community Action Against Racism, UK Uncut
As the government assault on public services begins we must oppose the police in their attacks on democratic rights and attempts to criminalise direct action against the cuts.
The only way we can defend our rights is by getting out onto the streets in a show of strength. Please join us.

Whose Streets?  ! Our Streets! Whose Police?! Their Police!

With an open mic for people to speak out against police harassment, intimidation and racism.
Posted by Anti Cuts Network at 11:24 No comments:

Email ThisBlogThis!Share to TwitterShare to FacebookShare to Pinterest
Labels: HSBC3

June 30th: Organise through this blog

Got an idea for the pickets, or action on the day? Or want to organise banner-making?

Here is an open space to plan action for June 30th. All are welcome to comment, and you will be able to organise publicly - simply 'comment' on this link to start the discussion. By keeping all discussion to this post (just keep commenting!), it will be clear what has already been organised, and will give everybody the opportunity to discuss action.

This post can always be found by clicking on 'June 30th Organising', in the 'Labels' section on the right hand side of the blog. 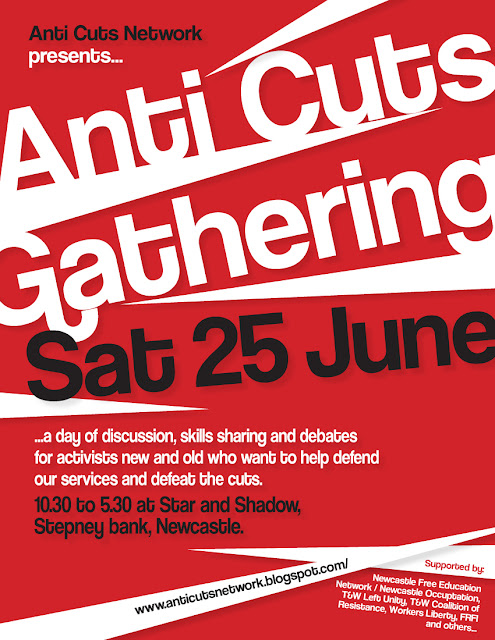 Thanks to all who helped with stall this week and to bands who played
for free on wed night at benefit gig ( Rathaus, 60ft Squid and
Negative Impulse) and all you punters who helped raise money for
defence campaign.

Volunteers needed can you help? (REPLY TO THIS EMAIL)
a. Stalls this week, Sat 11 June 12noon monument and wed 15 June 4.30 monument
b. Posters and leaflets for Gathering on 25 June. Can you take some
posters and put up on your community, workplace, college? Can you take
a bundle of leaflets or come out with others and put up around town.
c. help on Sat 25 June. We need 10 volunteers for the day?
Registration desk and ACN stall, someone in each workshop to record
comments and ensure runs to time, to help at lunch, to help set up

And of course
30th June Big Strike day! PCS, NUT, UCU, ATL plus others will be on
strike against attacks on conditions, pensions and cuts! There will be
more info about picket lines next week, a march from Centre for Life
to Monument (12noon tbc) and loads more fun, if you not on strike,
take the day off, if you at college or school walk out!
Get in touch
Posted by Anti Cuts Network at 09:49 No comments:

Email ThisBlogThis!Share to TwitterShare to FacebookShare to Pinterest
Posted by Anti Cuts Network at 09:45 No comments:

Email ThisBlogThis!Share to TwitterShare to FacebookShare to Pinterest
THOUSANDS of jobs will be lost on Tyneside as a result of Government cuts, a secret report has revealed.

Experts at jobs agency One North East have released a damning dossier setting out how £2bn will be taken from the region by 2015.

The cuts will see a predicted 50,000 people lose their jobs.

Some 20,000 of these will come from private businesses, with the rest coming from councils, hospitals, police forces and Government offices.


Newcastle city council is cutting over £50 million pounds and 600 jobs are going at the council this includes:
- £2 million cut from adult care services (2 day centres closed)
- Many libraries being made unstaffed and library charges increasing
- Connections service reduced by 50%
- Cuts in children services and Sure Start of 15%
- cuts to youth services Including axing new Youth Centre - MyPlace
- Every team or dept facing massive staff cuts in next 12 months
- Ran out of money to refurbished west end flats so knocked them down

Gateshead council facing massive cuts including:
- Sure Start nurseries all planned to close

School building programmes
- Darlington Programme scrapped
- Gateshead programme scrapped
- Northumberland Programme scrapped
- all this will leave hundreds of schools in terrible disrepair and thousands of construction workers put out of work
- Privatisation of schools / academies across the region will pull millions of pounds out of local authorities cutting services especially in special needs and family support and schools can become selective, others will be forced to close

NHS
- NHS walk in centre in Newcastle closed (had 20,000 patients visit last year!)
- Blood donor centre proposed privatisation and threatned with closure
- Heart unit threatened with closure
- NHS threatened with wholesale privatisation
- South Tees Hospitals NHS Foundation Trust forecasts a net staffing reduction of 119 full-time equivalent posts from 2010-14.
- County Durham and Darlington NHS Foundation Trust anticipates cutting 700 staff posts between 2011 and 2014
- Gateshead Health NHS Foundation Trust is reducing its workforce by the equivalent of around 331 full-time staff between 2010 and 2013, which is 10.8 percent of staff
- Northumberland, Tyne and Wear NHS Foundation Trust, which focuses on mental health, plans to cut its workforce by the equivalent of 405 full-time staff between 2010 and 2012. Much of the reduction is due to the transfer of the Trust’s social and residential homes to new providers

Darlington Arts Centre and Civic Theatre will be closed if Council plans to cut support from £1.2million to £zero go ahead. Darlington for Culture is a newly formed organisation proposing a Community Interest Company to take over running the Arts Centre on a much reduced budget. Darlington Borough Council may have to cut as much as £22m from a £107m total.

University students
All of the regions universities are proposing annual fees of between £8500- £9000 up from £3000! Students starting a 3 year degree 2012 with have an additional debt of £27,000 just for fees, this is on top of student loans to cover living costs. Its estimated a three year degree would cost you £50,000


Posted by Anti Cuts Network at 09:37 No comments:

Email ThisBlogThis!Share to TwitterShare to FacebookShare to Pinterest
Labels: Cu


We've been out publicising the Gathering, and thanks to all who came to planning meeting last week, and those who put up posters on Friday and leafleted Green Fest on Sat & Sunday.
Anti Cuts Network events this  week and next:

Other events coming up include:

Mon 13 June - Keep our NHS public meeting - 7pm, St Johns Church HallWEd 29 June - COR eve of strike public rally Unite the resistance - 7pm Black Swan Art Centre (with speakers from UCU, PCS, KONHSP and more) Also, can you help?Can you help with leaflets and posters, we have A3 red black and white posters, can you put up in your workplace or college or communty? Get in touch
Posted by Anti Cuts Network at 17:54 No comments: 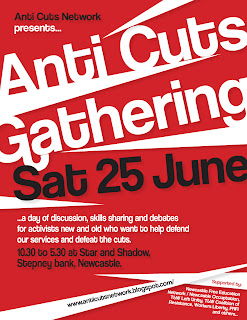 Posted by Anti Cuts Network at 00:14 No comments: